Gatchaman Episode 8: The Secret of the Crescent Coral Reef by lborgia88, saturn
[Reviews - 0] - Table of Contents - [Report This]

Chapter or Story
- Text Size +
Story Notes:
This is a Gatchamania Episode review. Opinions expressed are those of the author.  This episode review is image intensive.
Author's Chapter Notes:
Thank you, Shamrokchick, for providing screencaps for this chapter.

The Secret of the Crescent Coral Reef

We open with a lovely underwater scene of fish swimming over a coral reef.

"Galactor, the disrupters of world peace, have increased their power and run rampant all over the Earth," intones the narrator as a fleet of little mini submarines, each with two floodlights, come into view.

But wait, these aren't Galactor subs -the narrator continues that "Dr. Nambu, concerned with the Earth's future, has begun constructing a secret underwater base for the Science Ninja Team."

Now we see two men, the occupants of one of the mini submarines.

"The bottom of the sea is always so beautiful and peaceful," says one of the men and he and his companion discuss how unpolluted the sea is here and make it apparent that they are involved in the construction of the new base. "I think Dr. Nambu has the right idea. I hope construction goes smoothly," says the other man. "That's what we're here for; it's a job worth doing," concludes the first man.

Okay, these two have started the episode, we don't know their names, and they're nice, ordinary guys. They are so doomed...

Sure enough, at that very moment, they see what looks like some kind of explosion in the water ahead.

The water is dark, but we can make out... something, moving. The suspense doesn't last too long, though, as the man who spoke first gasps "It's a giant sea anemone!"

Now, a large orange "eye" on the end of a tentacle comes into view and fires some kind of energy beam at one of the mini submarines, causing it to veer and then explode. Next, the anemone hurls a boulder at the glass window of another mini submarine and it shatters and we see the two occupants (and I think they're the two we just met -they never should have said that it was beautiful and peaceful) are engulfed in water with cries of horror. Now we get a full view of the attacking anemone.

It grabs a mini submarine with one of its tentacles and smashes it into another submarine. The remaining mini submarines are in full rout, fleeing, but the sea anemone is zapping them with energy beams from its tentacles, and making them all explode. 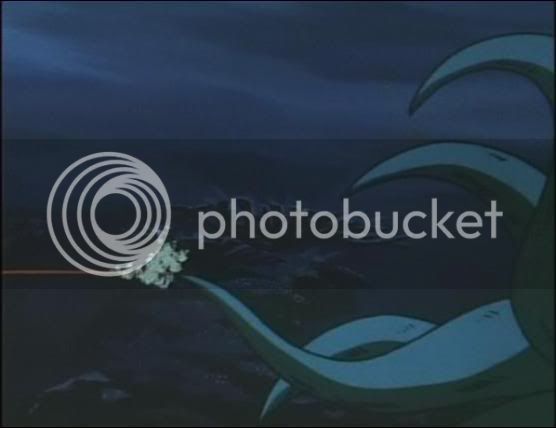 As the last mini submarine explodes and the screen goes red, the music changes to something much more serene and we're looking at a red balloon against a blue sky.

The balloon's string is snagged on a tree branch, but Ken (in civvies) pulls it from the branch and hands it to a small girl whose head is way too big for her body. 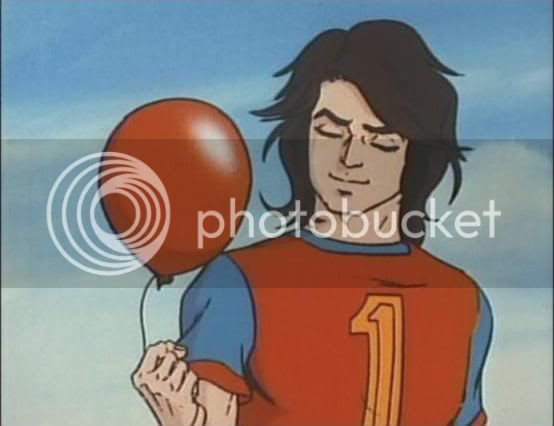 The branch also wasn't any higher than Ken's chest, so Ken didn't do anything that the girl couldn't have managed herself by raising her arms over her head, but she says "Thanks so much, Mister!" as two small boys and another small girl also come running over and gather excitedly around Ken.

Jinpei is standing some distance away, leaning against a tree and trying to look cool, casually swinging his bolas.

"You're out of sight, Mister! Just like Gatchaman!" says one of the boys. (His head is too big for his body too; in fact, all these kids look weird.) Okay, if Ken had climbed 50 feet up the tree to retrieve the balloon, and had then soared down to the ground with it, this kid's comparison might begin to seem apt. But as it is, the other boy also tells Ken he's really cool and that he looks just like Gatchaman. Hmm, just a couple episodes ago, a Galactor commander didn't recognize Gatchaman, but now these kids appear to know all about the Science Ninja Team -clearly, their fame is spreading. Ken seems mildly amused and asks the first boy if he's ever seen Gatchaman. The boy hasn't, but he knows that Gatchaman has "white wings, and he's a champion of justice!" and the other boy hopes to meet him someday.

By now, Jinpei has had enough of being ignored and he appears at Ken's side. "I'm a big Gatchaman fan too!" he brags, winking vigorously at Ken, "I know a lot about him!" Ken frowns nervously, but Jinpei proceeds to ask the little kids "So, who do you think is the coolest one in the Science Ninja Team?"

The answer he gets is "Gatchaman, G1! He is the leader, after all!" Jinpei's face falls briefly, but he seems to decide that he can live with that and he asks the kids who their second pick is.

Here, the two little girls chime in with "G3! She's such a cool girl!" and when asked by an even more perturbed Jinpei who the kids' third pick is, they say it's G2, then G5 "the fat guy," and last of all, G4. "He's pretty shrimpy!" says the first little boy, as all the kids laugh. Jinpei turns away, crushed, saying "I can't believe I ended up dead last."

But disappointment gives way to anger as he turns on them and snaps "You guys don't know jack about the Science Ninja Team!" as Ken rumples Jinpei's hair and tells him "Come on..." With a final indignant glare, Jinpei walks away after Ken.

Next, Ken and Jinpei are walking down a wide alley, and Jinpei is still complaining about being last in popularity, despite being "the 18th successor of the Iga Ninjas!" Ken tells him he's doing a really good job and says "Don't let it bring you down, dig?" (ADV cannot resist 70s slang!) but Jinpei is not appeased and whispers craftily to himself that he'll become the most popular one on the Team.

At that moment, Dr. Nambu contacts them via their bracelets and tells Ken to launch the God Phoenix.

Jinpei is all "This is my chance!" and he and Ken both transmute in the alley, in broad daylight, in full view of about 40 windows. Sigh...

Next, the God Phoenix soars through the sky, and we are mercifully spared from watching all the recycled footage -everyone is already on the bridge. On screen, Dr. Nambu informs the Team that a secret base is being constructed for them.

Jinpei is especially pleased at this news. Dr. Nambu goes on that he fears Galactor knows about the construction of the base, as ten days ago, "several of our submarines were mysteriously destroyed while patrolling." Joe is ready to attack in retaliation, but Dr. Nambu only wants them to patrol around an uninhabited island "at point G in the South Pacific."

Jinpei concludes that their base must be being built near that island, but Dr. Nambu merely says that he is certain that Galactor will make a showing and that the Team must patrol around that island and then report in. Jinpei is disappointed that they are only being asked to search, and mutters to himself that this won't give him "a chance of becoming number one." However, Dr. Nambu is determined to ruin everyone's fun and he clearly expects Ken to keep Joe and Jinpei in line. "Gatchaman," he says, "I've said this many time, but we must not start a battle with Galactor." Ken dutifully agrees. As soon as Dr. Nambu is off the screen, Joe grumbles "Great, just patrolling again..." disgustedly as Jinpei chimes in "It's so boring!"

Jun, however, speculates that there's more that the Doctor isn't telling them, and Ken concurs.

Soon, the God Phoenix is approaching the uninhabited island, and Ken instructs Ryu to take the God Phoenix around its perimeter. As it soars by in the sky, tentacles rise from the water and wave ominously, but the God Phoenix banks and then dives into the sea.

Berg Katse, somewhere, is watching the God Phoenix underwater on a screen and he turns to face Leader X, telling him that the God Phoenix has been sighted patrolling close to the island. "Dr. Nambu's secret base must most certainly be close by." Leader X wants Berg Katse to find the base, as "we will be in grave danger" if it is completed.

Back to the God Phoenix, patrolling along the sea floor, we see Jinpei sitting inside the glass dome on top, watching the fish and eating some kind of hand-held snack.

The approach of a massive shark startles Jinpei, and he quickly descends to the bridge, where Jun and Ken are both laughing at him. "Silly boy," says Jun, "That shark couldn't get you -no wonder you're last in popularity!"

Jinpei scowls at Ken and says "You blabbed, didn't you?" but Ken just laughs even harder (this has always struck me as rather uncharacteristically mean of Ken). Jinpei is sad, but rallies with a "Just wait, you'll see!"

Now we see the God Phoenix moving through the sea, and just ahead, the giant sea anemone appears and waves all its tentacles menacingly. On the bridge, Jun gasps in surprise, but now it's Jinpei's turn to jeer "Come on, Sis, it's just a sea anemone!"

Ken interjects that it's much too large to possibly be a real sea anemone, and everyone turns grave.

Ken, quite sensibly I suppose, says "Ryu, try to avoid it." Well, Ryu does try, but the sea anemone begins jumping along the sea floor, following the God Phoenix.

"That's no ordinary sea anemone," says Ken, pointing out the obvious. "What is it?" asks Jinpei anxiously as Joe leans over Jinpei's shoulder and startles him with "a monster!" "Don't scare me like that!" protests Jinpei, as I chuckle at this little moment of Joe humor.

The sea anemone begins firing its energy beams at the God Phoenix.

The God Phoenix pitches and lurches from the explosions around it, and causes Jun to unnecessarily flash her panties as she and Jinpei fall to the floor while Ken and Joe grimace manfully while remaining in their chairs.

They all conclude that Galactor is behind the sea anemone, that it must have destroyed the mini submarines, and that it must be looking for their new secret base. Jinpei, however, is now excited at this apparent opportunity to improve his popularity ranking through combat with the sea anemone. But, Ken instructs Ryu to "release the smokescreen" and the swirl of dark that the God Phoenix releases into the water enables them to evade and escape the sea anemone.

Now, we're back above water and a full moon is shining on the sea's surface. The God Phoenix is parked on one of the island's beaches and, heedless of their vulnerability (and comfort), the Ninjas are all sleeping outside on the bare ground. Joe and Ken are somehow managing to sleep while sitting up. (Come on, surely there's something better to sleep on inside the God Phoenix than sandy ground!)

Jinpei, as it turns out, is not in fact sleeping -perhaps because Ryu is snoring beside him. As Jinpei scowls at Ryu, he can hear in his mind the words of the little kids who called him "shrimpy." Jinpei stands, just as Ryu swings his arm in his sleep and trips up Jinpei. With a final glare, Jinpei shoves Ryu's arm with his foot (and Ryu turns over and keeps sleeping) and he heads for the God Phoenix. While we see Ken and Joe still sleeping while sitting up, Jinpei heads off alone in his helico buggy, into the sea.