A scientist and his dog are kidnapped by Galactor, and it's up to the Science Ninja Team to rescue them. But will the dog save the day?

This is a Gatchamania Episode review. Opinions expressed are those of the author.

This episode review is image intensive. 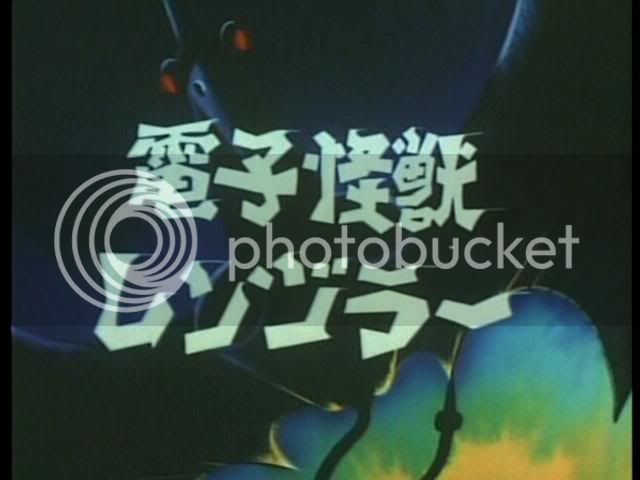 A helicopter flies over snowy mountaintops. In an icy valley, surrounded by mountains, lies a lake. The narrator tells us that this is Lake Mountaintop. A flying dragon that survived the Ice Age is hiding in its depths. It is usually frozen solid throughout the seasons of the year, however this year the icy lake has melted into flowing water.

Inside the helicopter, a man studies the suddenly not-frozen lake.

And he brought his dog with him! What kind of dog would you bring to snowy mountaintops? Why, a St. Bernard, of course!

I'm looking for the little barrel they're supposed to carry on their collars, but all this dog has is a golden tag.

The man is Dr. Miwa, and he is studying the lake, hoping to use it to generate solar energy. When he heard the news that the lake was no longer frozen, he rushed to investigate. He is taking pictures of the area.

"I've never seen the lake like this." he says, as the dog howls.

But one of his pictures turns up something very interesting!

The dog's name is Taro, and he begins barking. Other helicopters are surrounding Dr. Miwa's helicopter!

The other helicopters begin broadcasting loudly enough for the Doctor to hear them.

"Welcome Dr. Miwa!" they say. "Our Master, Lord Katse, is expecting you!"

Miwa quickly realizes that these helicopters are from Galactor. Not too surprising, given what you saw with your camera, is it Doctor?

"This is an order from Lord Katse. You have no choice but to come with us!" the Galactors demand.

Miwa pulls on his stick, lifting his helicopter up and away from the Galactor helicopters.

"You can't get away! Resistance is futile!" the Galactors shout. I'm wondering if the ADV scriptwriter was a fan of the Borg.

But Miwa doesn't listen. He opens the door to the cockpit.

Then he gives Taro the camera, in the dog’s mouth.

Well, at least Miwa knows Nambu, and knows where the information he has would best be sent.

Taro jumps from the helicopter, and the Galactor helicopters begin shooting at the dog.

Hey, these helicopters are piloted by goons! I'm wondering if they're cold. They're in the mountains, and Miwa is wearing a super thick coat and enclosed in his helicopter. These goons are out in the open and have no special warm clothing.

Seeing that Taro survived this, the goons begin shooting again. Taro jumps, but misses, sliding off a cliff, the camera still in his mouth.

The dog falls down into the crevasse, a canine whimper echoing behind him.

Miwa is distraught, and allows the goon helicopters to lead him away. But no one sees that Taro has survived. He barks after the departing helicopters, the precious camera lying by his side.

We cut to the Crescent Coral Base, where fish swim by in their ever-present parade. Inside the base, a green-gloved hand catches a pair of bolas.

Ah, it's Jinpei of the amazing color-changing gloves!

The Swallow complains that Nambu is late. Jinpei really wants to meet the Doctor's 'special guest'.

A loud bark sounds, and Jinpei is so shocked that he hits himself in the head with his bolas.

Then he leaps into a surprised Jun's lap.

A large St. Bernard approaches the Swallow. It's Taro!

"Oh man! He's coming for me! Help me, please!" Jinpei screams in fear.

So, let me get this straight. Jinpei loves bugs and whales, but puppies and dogs are on the 'do not care for' list.

"Jinpei, what's the matter with you? It's just a dog!" Jun says calmly.

I have to say, this little scene strikes a personal chord with me. I, like Jinpei, have a deathly fear of dogs, and I can completely sympathize with his reaction, because this is pretty much what I do whenever a dog comes near me. At the same time, I can appreciate Jun's calm reaction, because it's how I wish I could be. But instinctive fear is a terrible thing to overcome.

Ken isn't scared of Taro, but he is so surprised to see that the 'special guest' is a dog that his upper lip drains of all color!

Jinpei is so relieved not to have the dog near him anymore that he falls off of Jun's lap. 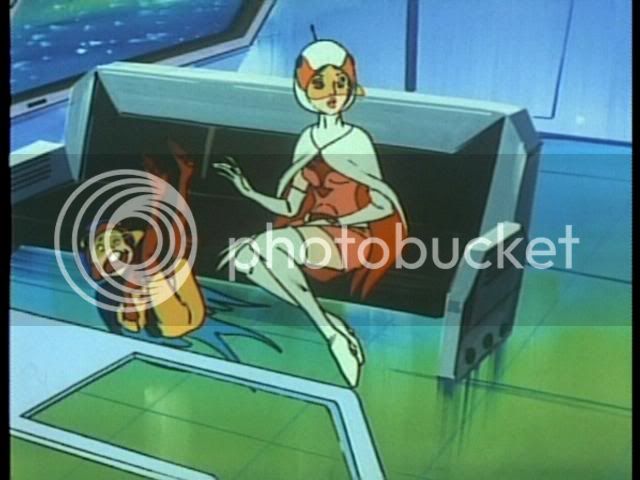 Nambu tells the Team that Taro belongs to Dr. Miwa, a world-famous solar energy research scientist. Taro is so special to Miwa that Nambu was surprised that the dog delivered Miwa's latest results. Nambu shows the Team what Miwa sent. We even get to see the 'filmstrip countdown'!

Notice how the screen has just 'appeared' in front of the door through which Nambu and Taro entered.

First, Nambu shows the pictures of Lake Mountaintop, which has great potential to produce powerful solar energy. It could possibly even surpass nuclear power.

"But how can that lake make solar energy?" Ryu wants to know. Thanks for asking, Ryu, because I was wondering the same thing!

Fortunately, Nambu has a helpful diagram.

The lake stays frozen throughout the year. If the ISO uses its surface as a polarization lens, then the sunlight can be stored, and converted into solar energy.

Jun thinks this is a wonderful invention.

But Nambu points out that the project has yet to be completed. Dr. Miwa has disappeared. Apparently, he rushed out of the research center when he heard about the lake being unfrozen. Remember, the lake has to be frozen solid for the solar energy project to work.

Ken wonders if someone is trying to interfere with Miwa's research.

"I think it may be more sinister than that!" Nambu replies. "I think that someone is trying to produce powerful destructive energy, by stealing the Doctor's research!"

Of course, by this point in the series, we all know who is behind anything like this.

Nambu agrees. Only Galactor would do this. And to confirm his assessment, Miwa's picture of the Galactor base in the lake comes on the screen.

The picture on the screen shifts to an image of the real underwater base. The eyes on the devil logo are windows, and through one of them we see goons lounging around.

Obviously these are some overworked goons. Clearly they're ready to be promoted to 'ninja-fodder' status.

The inside of the base glows with bright, powerful conduits stretching down seemingly endless metal tube-corridors. This looks like a solar energy project to me!

In another room, a bruised Miwa is rudely awoken by goons. He is face to face with Berg Katse.

Katse shows Miwa images on a monitor. We see a mecha dragon flying through the sky.