This is a Gatchamania Episode review. Opinions expressed are those of the author.

This episode review is image intensive.

A strange machine shaped like a Turtle with a pointed nose attacks a uranium storage facility during a rainstorm. The military is unable to stop it from taking the valuable resource. The ISO discusses the problem.

"The uranium we wanted to use for World Peace has been stolen by the monster robot!" says Director Anderson.

No one knows who is responsible... except Dr. Nambu. He explains about Galactor, and that he has created the Science Ninja Team to fight Galactor.

Ken is flying in his Cessna when he is contacted by Dr. Nambu and told to assemble his team and launch the God Phoenix.

Ken transforms into Birdstyle, and the five members of the Science Ninja Team are introduced as they join up with the God Phoenix, flown by Ryu.

For some reason, Ryu seems to be flying the God Phoenix from the elevation bubble on the front of the ship. He then lowers on the platform to the Bridge.

Dr Nambu orders the team to find the Turtle Robot and use it to locate Galactor Headquarters.

Joe is disappointed because he wants to (Surprise!) blow it up with Bird Missiles.

The Science Ninja Team looks for the Turtle mecha. Jun is sitting next to Joe...

And then, surprise! Two seconds later she's sitting next to Ken. This Swan gets around!

The Science Ninja Team spots a suspicious whirlpool in the ocean so... they dive into it! They follow it into an underground cave, from which they see smoke emitting.

Meanwhile the Turtle King is attacking another military facility. The God Phoenix arrives on the scene, and Joe decides to fire Bird Missiles. Ken literally holds him back, and Joe accuses Ken of being scared. But there's a commercial break and it doesn't come to anything.

Jun and Jinpei spot the Turtle King on their monitors.

No one knows what to do, and Joe wants to fire Bird Missiles again.

Ken stops him and proposes that two of Team infiltrate the Turtle mecha. Ken tells Jinpei that going after stolen uranium is too dangerous for him, and so he (Ken) is going instead.

Joe wants to go too, but Jun tells him that he can't, because [i]she is the explosives expert. It looks like Joe doesn't get to do anything fun today. His scowl tells the story. 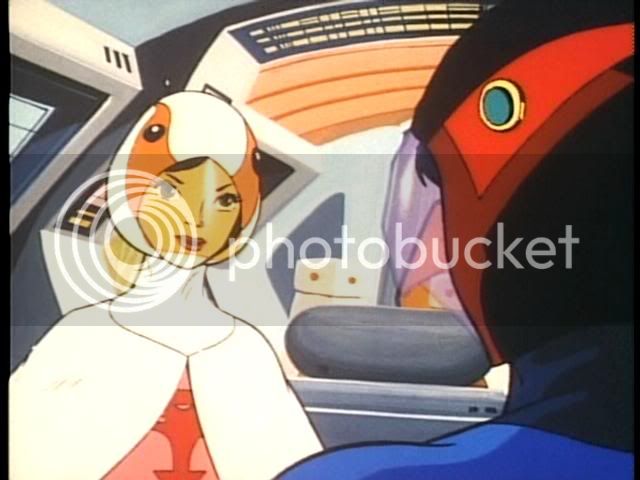 Of course, Jinpei takes this opportunity to point out that Jun just wants to be alone with Ken. Jun isn't too happy about this.